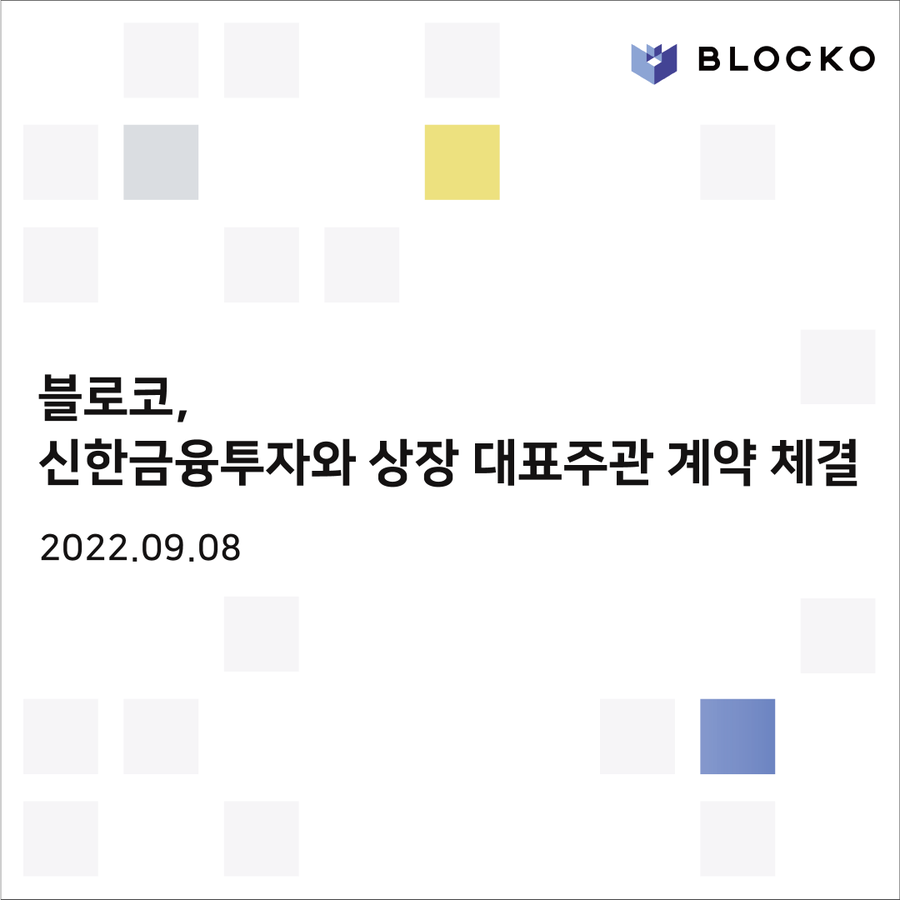 On the 8th, Blocko announced that it had signed a contract with Shinhan Financial Investment to manage the listing for the IPO. Blocko is currently preparing for an IPO with the goal of listing on the KOSDAQ in 2023.In May, it sent a Request for Proposal of Bidding (RFP) to five domestic securities companies. Then, in August, a presentation was held to select the listing organizer.

In addition, in consideration of △continuous research support through the innovative growth team, △recruitment of Yoon-bok Seo, former managing director of NH Investment & Securities, as the head of the IPO division under the independent IPO headquarters system, Shinhan Investment Corp. was selected as the lead organizer of the listing.

Previously, Blocko attracted investment from Intervest, POSCO Technology Investment, and Shinhan Bank, and the accumulated investment amount was about 28.5 billion won. This year, it received an investment of 5 billion won from Daehong Communications, a marketing affiliate of Lotte Group, and was recognized for its corporate value of about 90 billion won.

The successful turnaround is also expected to help the IPO. Blocko succeeded in turning to black last year, recording 2.2 billion won in sales and 600 million won in net profit. This year, it is focusing on new businesses such as software as a service (SaaS) as well as existing businesses with the goal of maintaining 4 billion won in sales and a surplus in net profit. To this end, it also completed the transfusion of funds in preparation for an IPO by expanding human resources.

Tae Seong-hwan, head of the IPO department at Shinhan Investment Corp., who was in charge of the listing of Blocko, said, “The government has recently been promoting the enactment of the Virtual Asset Industry Act, and attempts to incorporate digital assets into the system are continuing.” Based on the largest number of cases of blockchain construction in Korea, such as Financial Group, Doosan, Lotte, and Korea Securities Depository, MSP has a leading position, so he supervised the listing.”

Kim Jong-hwan, CEO of Blocko, said, “We plan to promote the listing of a first-generation blockchain company through the selection of Shinhan Financial Investment’s representative listing manager. ” he said.

Next, CEO Kim said, “We are preparing synergistic blockchain services such as non-fungible tokens (NFT) and security token offerings (STO) through collaboration with Lotte Group affiliates. will,” he said.